We will take a few blows, but do not throw us out of school! 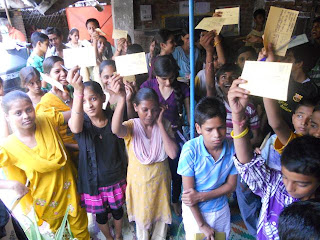 We will take a few blows, but do not throw us out of school are the chilling words many pwhy students told their teachers last week, a day after the High Court heard a petition on the abysmal plight of the schools they study in. The story goes like this.

For the past months or more children have been regularly complaining of the state of the schools they study in. From lack of basic facilities like toilets and drinking water to cramming of students in classes - in some cases 150 in a class meant for 50 -, from corporal punishment to teachers absenteeism, from broken ceilings to non functioning fans, the complaints were many each more shocking than the other. This was supposedly XXI st century India, the India our rulers would like to showcase as a glitzy and shining land, yet the accounts of these children seemed to be out of a Dickens's novel. Moved by their concern I decided to get in touch with a lawyer friend known for his social activism. He asked me to bring the kids to his office in the High Court. The children shared their woes and were asked to write them down, get them signed by as many as possible and send them to the lawyer. Days passed and we kept waiting for the children's letters but none came. Instead we got a litany of excuses. The penny dropped: the children were scared of writing their problems. It was time to act again and empower our kids 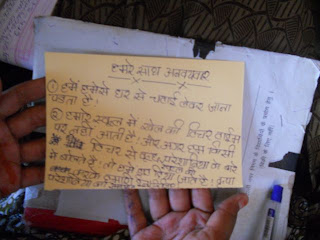 I rung the lawyer up and he told me he would come and talk to the children of their rights and organise a postcard campaign where children would be given postcards and would be urged to write their woes. The cards were to be addressed to the Chief Justice, Delhi High Court. So on a bright Sunday morning a post card campaign was organised in our women centre and heaps of children shared their concerns. It was touching to see them write what they had carried for so long in the hope that someone would hear. They has just one wish: to be able to study in the best conditions possible. The post cards were written and handed over and a few days later a petition was filed in court and heard by the Acting Chief Justice. The government was given 4 weeks to file their reply. The voice of voiceless children was finally heard.

But the feeling of achievement was short lived. The next day itself the furore of the school fell on these kids. A sample letter was written of the blackboard for all to copy. The letter said that an NGO - us I guess! - had plied them with toffees and biscuits and 'forced' them to write these letters. Some older kids were even beaten resulting in them saying: We will take a few blows, but do not throw us out of school ! The fear of being cut off the rolls loomed large.

We will take a few blows, but do not throw us out of school  are words one must ponder on as they reveal how much these children want their education. In spite of the fact that corporal punishment is against the law, they are willing to take some blows as long as they remain in school. The scare of being thrown out of school is used and abused by their teachers. They know they hold a trump card however unjust. I cannot but remember the young girl I found many years ago crying on her home from school. When I asked her what happened she told me had been beaten by her teacher. When I asked her why she replied she did not know. And how can I forget the secondary boys's answer to my question: what would you change in your school? I would have bet my last rupee that their answer would be: we would stop the beating. Imagine my schock when they said: we would tell the child the reason for which he was receiving a beating. Acceptance of beating without reason is nothing short of scary. And nothing has changed over the past 12 years. Kids are still being beaten in schools and have simply learnt to accept it. How would this translate in their adulthood is question begging to be asked.

The state of Government run schools has deteriorated over the years. This is sad but true. If one side of the spectrum has witnessed a proliferation of private schools of all shades and hue, the other has to live with degradation and decay. One wonders why as the State runs perfectly good schools like the Central Schools. Why then is not each and every school of the same as calibre as Central schools?

Today we are a city that prides itself of having an Ice Bar and Jimmy Choo and Louis Vuitton outlets. But in this very city an innumerable amount of bright and innocent children are being denied their right to a good education, the only way they could better their morrows. Is it no time to do something for them!