Down by the riverside 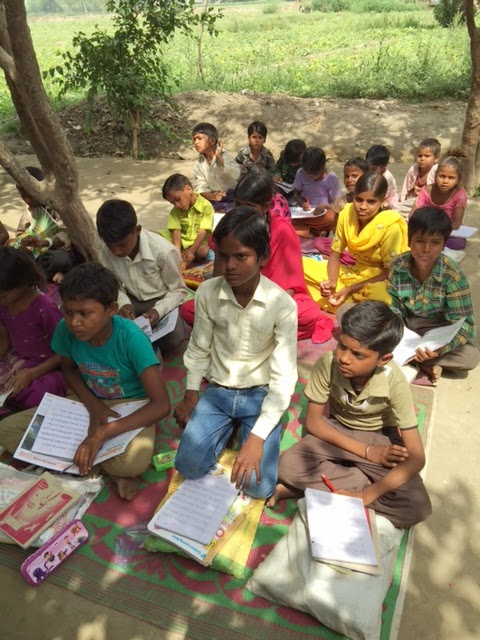 Normally I have no problem in writing about any and everything that comes my way. But yesterday for the very first time I was overwhelmed by a surge of emotions that I was unable to process, let alone put down in writing. It is now time to share this unique experience and I hope that my words will do justice to story I am about to tell. When faced with a succession of intense feelings, it is sometimes wiser to take a deep breath and reign in the desire to follow your heart to let reason speak. So let me narrate things as they happened. A few days ago Dharmendra told me about a man who was teaching some children in the proximity of our women centre and needed some support. This had been told to him by our landlord who owns some tracts of agricultural land on the bank of the river and the children in question were the kids of the people who tended to his land on a contractual basis. This was all double Dutch to me as till date I was not aware of the existence of the rural side of the very city I lived in. My first reaction was to say the least not very enthusiastic as keeping pwhy on course was enough of a challenge and the thought of a new item in our budget was anathema. But Dharmendra is not one to give up and if anyone sees with his heart deeper than me, it is him. In his gentle voice he persisted adding that the landlord was willing to give us space and that the cost would be minimal. He requested me to at least come and meet the kids.

I guess he knows me better than I now myself. 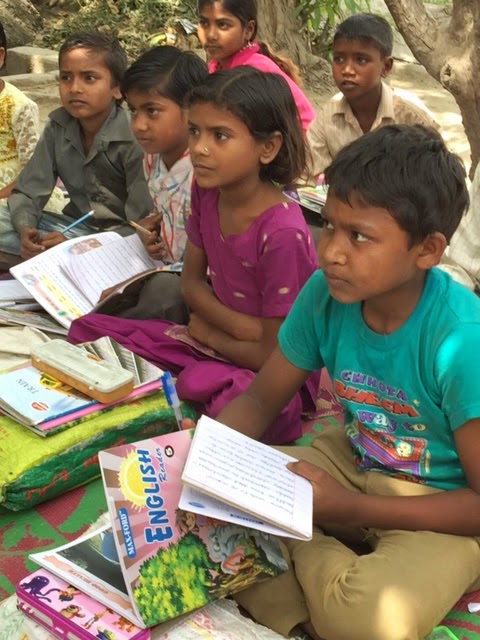 I agreed to do so, and as we had three volunteers who had come for Rani's marriage, I thought it would be a great idea that they to came and 'met the kids!' We decided to do so yesterday morning. Before I go any further, I need to share a thought that has haunted me time and again. I have often asked myself the one 'why' that has been never shared with others but maybe time has come to do so. That why is simply: why me! Or in other words why was I destined to take the longer road. I know I have come up with a range of clichéd answers that range from the famous paying back a debt to answering the whys that came my way, but deep in my heart I have always felt that someone somewhere held all the strings. I was just an instrument. In recent times, when the weight of the morrows gets heavier to bear, I have also asked myself whether I had reached the end of the road. So I must confess yesterday's visit did have a tinge of misplaced duty and a slight lack of early days brio. The one surprise that did put a smile on my face was the fact that the husband accepted Dharmendra's invitation to be one of the party. 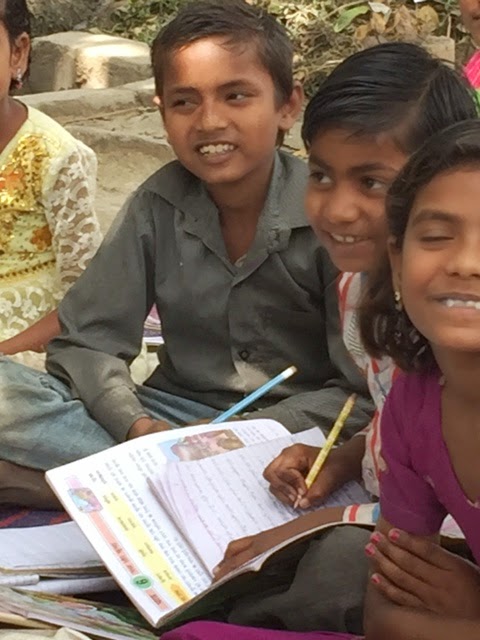 We drove from the women centre towards the riverbank, first on a reasonably good road and then turned onto a bumpy one that led us straight to the fields. After a short while all we saw were tracts of vegetable patches dotted by a few thatched dwellings. The buzz of the city had vanished though it was but a short distance away. We stopped near a cluster of such dwellings, and behind one of them, under a beautiful tree and next to a well sat a group of children between the ages of 4 and 14. They all had books and copy books in front of them. A middle aged gentleman nudged them to wish us and they did, albeit hesitantly. The gentleman was their teacher. For an instant time stopped and my heart missed a beat as I felt a huge sense of belonging. It felt like coming home. The teacher asked the children to introduce themselves and show us their work and we were all impressed by their well kept copy books, neat handwriting and shy pride as they showed us what they had achieved. Slowly the story unfolded, another story of India, one that could have remained untold. 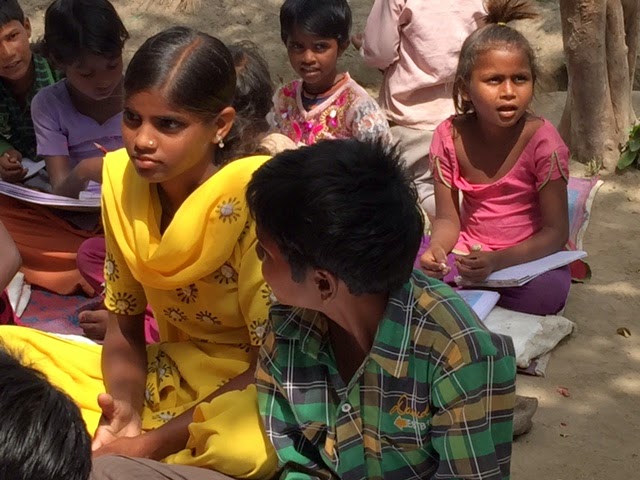 These children had never been to school and the work we saw was the fruit of two years of unstinted effort by one man. This man was a government school teacher who left his job because of the uncaring attitude of his colleagues and their lack of desire to teach. He decided to do something meaningful. Belonging to the same district as the one these children belong to, he knew of their existence and the plight of the agricultural labour who had left their villages in search of a better life. They had finally settled in this area where they tended to the land of rich landlords to whom they paid a yearly sum. They grew vegetables, the very ones that reach our doorstep. The children helped in the fields and never went to school. Our caring teacher decided to change things and teach these kids. To ensure that their education was validated, he registered them in a school in a village in the adjoining state and worked out a system by which they would get their certificates. The system worked spot on. The teacher took some money from the parents and met his added needs by taking tuitions classes in the evening. In a span of two years he had 'mainstreamed' these kids.

I listened bewildered and humbled as he told his tale. My eyes smarted and my throat constricted but I held my tears. As I heard the man speak my father's dying words : Don't lose faith in India, came to my mind. The man telling his story in a soft voice spelt: HOPE. The children and their pristine copy  books filled with beautiful writing were a stark reminder of how we had failed them and how worthy they were of our care and attention.

As far as I know, these kids do not exist. Their parents have no papers, they are not registered in any school, they do not appear on any enumeration list, they are invisible. They read about the metro but have never seen one, let alone ride one though a metro station is being build a short distance away. They have read about India Gate but have never seen it. They read about wild animals but have never been to the zoo. Their world is limited to a radius of one kilometre. It ends at the shadowy figures of the tall buildings of Noida seen in the mist. Every year, when the rains come, their homes get flooded and they move to the top of the embankment waiting for the waters to recede. They spend their day playing or working in the fields where extra pairs of hands are welcome, even if they are tiny. They look at you bewildered when you ask them what they like doing. Come on! There is only one answer: studying! And when you prod a little and ask them what they like eating some may come up with the name of a sweet. So you wreck your brain and look for the question that would result in an answer that would make them seem better than you and the penny drops: what grows in your field? And pat come the answer: tomatoes, gourds, aubergines, beans.... So you tell them that you have never seen them in the field but only in shops and they laugh wholeheartedly like only children can. And for that tiny moment you forget that these are invisible children no one cares for. Then the anger, the rage, the feeling of helplessness! What can you do to change things. And your mind runs wild: a bus trip, a metro ride, a visit to the zoo! Perhaps. But what you need is to change their lives, to bring them into the light, to give them their usurped rights.

These are children of India, remember! The ones who are protected by rights, the ones for whom programmes are made ad nauseum and never truly implemented. But then how can you get rights when you do not exist. As their teacher told us with extreme wisdom, these children live the same life as children centuries ago, tilling the alluvial plain and moving to the banks when their homes are flooded to move back again and again and again. Nothing changes nor has changed.

We will do whatever we can. These are just a handful of children whose parents did agree to send them to school for two hours and even pay the small amount the teacher sought. But there are hundreds and hundreds of such children that dot the riverside. Some parents prefer spending the extra coins on hooch; others feel education is useless and a waste of valuable time. 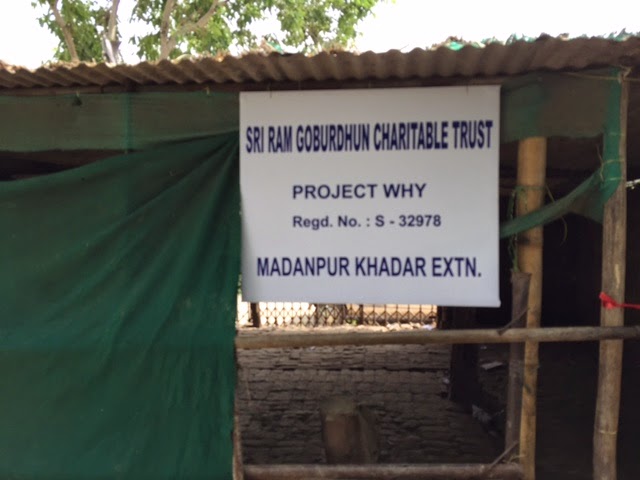 The space we have been given is a cowshed that once housed two jersey cows owned by our landlord. They have found better pastures. The shed will now house the new project why outreach that I feel like calling 'project why in the fields'. It will house the dreams and aspirations of these very very special children, dreams that have been entrusted to us.  We will do our best but the questions remain and the anger too. Is this the India the likes of my mama fought for? Is being in power sine-qua-non to losing your values and the ability to see with your heart? When will India be truly free! 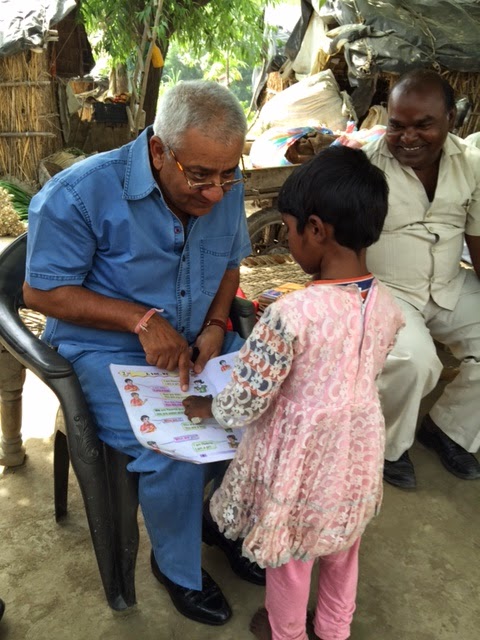 It all started with the question why me? Because there is no option. Because it is His will! Call it serendipity but two cameos gave credence to my thoughts. The first was that my husband was not only there with me but was moved enough to spend time listening to a little girl read him a lesson in English. Ranjan is not an expressive man and in all these years he has rarely, if ever connected with children even  on the rare occasions he visited project why. But here he was gently encouraging the little girl. Needless to say, I was floored. And if that was not the wink from the Gods I sought, I got another in the garb of a wonderful soul who is willing to provide these children with a healthy lunch and also give them all the resources they need!

Just a small point that needs to be made as the country debates the land acquisition bill and the farmers' rights. The labour that till the land and have to pay a substantially large amount of money to the landlord, irrespective of what they make, irrespective of their loss due to the vagaries of weather are not the ones that receive the compensation given by the State. This goes to the one who 'owns' the land.